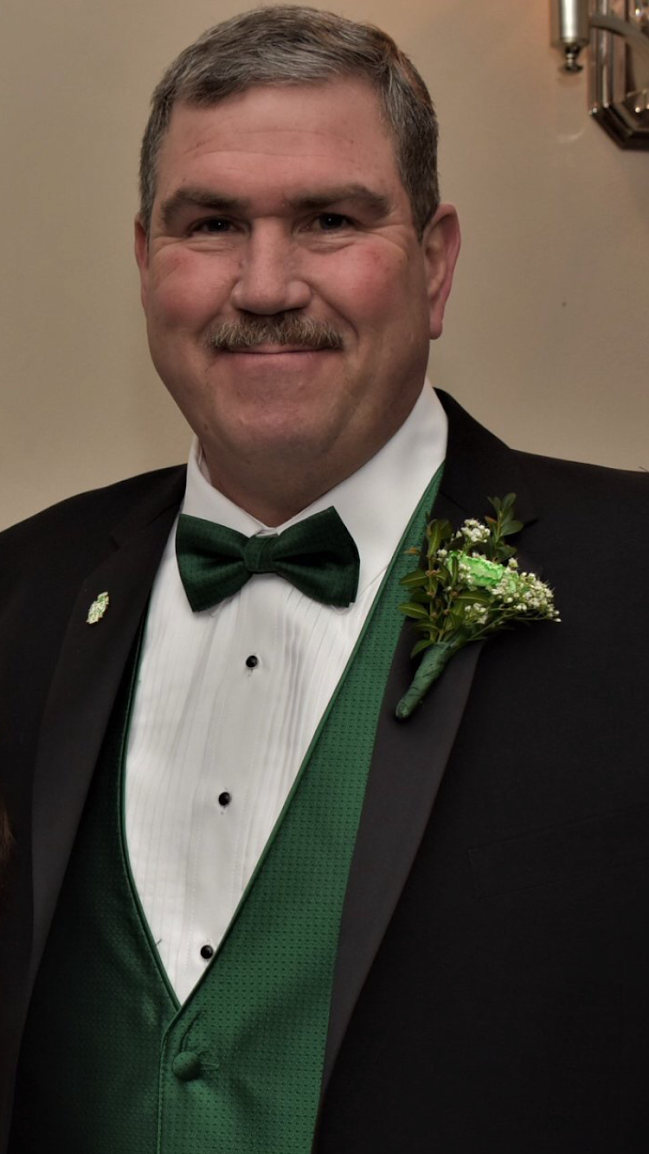 Seamus was born James Francis Bohan in honor of his maternal and paternal grandfathers. Seamus is the son of Margaret Smyth Bohan and the late Michael Bohan. He is the oldest of 7 children who were born and raised in Hamden in the shadows of St. Rita Parish, where they all attended church and elementary school. Seamus is also a graduate of Hamden High School.

Seamus is a first-generation Irish-American as his mother, Margaret hails from Aughnasheelin and his father, Michael from Mohill, both in County Leitrim, Ireland. Michael’s brother, Jim Bohan took one look at his nephew after he was born and said, “He’s Seamus”! This moment marked the beginning of Seamus’ call to duty to help preserve the Irish culture and traditions of his family’s heritage here in America as his very name was transformed into Gaelic and how he has been known ever since.

It was father and son, active in the Irish community since birth, and a foreshadowing of a legacy 56 years in the making. Michael Bohan arrived in the United States in January of 1956 and immediately volunteered his time in his new land. He joined the Parade Committee as one of the original members of the 1956 committee that reestablished the New Haven St. Patrick’s Day Parade as we know it today. Michael was an active 48-year member right up until his passing in 2004, including rising through the ranks and becoming the Grand Marshal of the 1991 Parade. Young Seamus was always by his side, marching in all the parades, as well as volunteering in the kitchen helping cook and washing pots & pans at 10 years old on one of the longest running fundraisers, the Corned Beef & Cabbage Dinner. Seamus worked with his father on that event and many others from then on, and still to this day. As Michael’s health became more challenging, Seamus took on the leadership role in 1999 and has been Co-Chair of the event alongside his friend and mentor, Jim McGovern ever since. In addition, in 2009, Seamus has also been Co-Chair of the Public Safety Gathering fundraiser, formerly known as the Public Safety Muster, and the Shamrock Open Golf Tournament. Seamus’ siblings also work with him on the golf committee.

The Bohan family, along with all the other New Haven area Irish immigrants’ second home was the New Haven Gaelic Football & Hurling Club. Seamus is a lifelong member. His father, Michael was a founding/Life Member, Past President, Gaelic football player, coach and parent as Seamus and his brothers all played and traveled to Ireland. Seamus has fond memories of all the Sunday’s spent listening to Sean Canning’s Sounds of Ireland radio show before church then heading to the club with his parents, siblings, cousins and friends.

As a young adult, Seamus felt the call to duty once again and became a member and active volunteer at the Knights of St. Patrick in 1981, where Seamus also is Co-Chair of their Public Safety Night and responsible for honoring heroic members of the police and fire departments for many years.

The Smyth and Bohan families were inspired by Michael’s generation who was so dedicated to a life of service to the Irish community and many of Seamus’ aunts, uncles, cousins and siblings are very active members contributing to the preservation of their Irish culture. Seamus’ sister, Margie Bohan is an active Parade Committee member. Two of his aunts were crowned Miss Ireland; Liz Smyth Driend 1968 and Bridie Smyth O’Dea 1974. Three cousins crowned Parade Queens/Honor Attendant; Doreen Keogh Busca 1993, Bernadette Smyth LaFrance 1994, and Sheila Smyth Vanacore 2000. Two cousins rose to the ranks of Grand Marshal; Bernadette Smyth LaFrance 2008 and Timothy F. Gallogly 2015. One cousin added to the family legacy by becoming the first-ever, female Executive Chairman of the Parade; Bernadette Smyth LaFrance 2020. Seamus’ proudest moment of all was when his daughter, Claire Bohan was crowned the 2019 Parade Honor Attendant, becoming the 3rd generation of the Bohan family to serve and earn a place in the history books!

There was another call to duty that became Seamus’ beloved career as a New Haven Firefighter that became the perfect match and essence of Seamus as he could serve New Haven and the Parade with the same love and devotion. After nearly 24 years, Seamus retired from the City of New Haven Fire Department in 2019 after reaching the rank of Captain. Seamus grew up marching in the Parade first holding his father’s hand from the tender age of 5 years old, next with his New Haven Gaelic Football Teams, then as a proud Irish-American New Haven Firefighter, Lieutenant in 1999, Captain since 2015 as well as the distinguished role of Sergeant at Arms, and as a Parade Officer the past 3 years. Seamus lives in the town of Orange with his lovely wife, Dina and their three beautiful children, Sean, Claire and Grace.

Just like his upbringing, Seamus’ children have inherited their father’s call to duty and are following his lead. All three children volunteer at the Corned Beef Dinner, learning how to cook, serve and fundraise just like their father and grandfather.

Seamus’ historic march down Chapel Street will be filled with extraordinary pride. He will walk through the very neighborhoods he loved, served and protected for 24 years as a firefighter. He is truly following in his father’s footsteps marching the exact same route, as they become the second father and son to be honored as Grand Marshal of the Greater New Haven St. Patrick’s Day Parade in history. Just as Michael held Seamus’ hand when he marched as a young boy, Seamus will hold his father’s love and legacy in his heart as he leads the Parade as the 2020 Parade Grand Marshal on a date to be detirmined.

Grand Marshals of the Parade

Being Grand Marshal of the New Haven Parade is unlike most Grand Marshals of other parades. Our Grand Marshal position is not a honoree position or special guest. The Greater New Haven St. Patrick’s Day Parade Grand Marshal position is a working position of the Parade Committee. He or She is part of the Parade Officers for that year overseeing the daily operations and working to raise funds. This person has worked as a Parade Committee member for several years (average 10+ yrs), and moved up the ranks in various positions. They include but are not limited to; General Committee Member, Special Committee Chair, Event Chair, Chief of Staff, Secretary, and Parade Chairperson.

The Grand Marshal of the Greater New Haven St. Patrick’s Day Parade is chosen by the Executive Committee. This is done at its annual meeting in June.

Duties of the Grand Marshal

The Grand Marshal shall:

A)  Attend all meetings of the St. Patrick’s Day Parade Committee and as many standing committee meetings as possible;

D)  Assist the Chairperson on all matters pertaining to the Parade;

E)  Chair the General Committee meetings in the absence of the Chairperson;

F)  Meet with the present officers, along with the Executive Committee Chairperson, prior to the first General Committee meeting to explain the year’s plan;

G)  Be responsible for collecting minutes of each meeting, any correspondence, and all public relations material pertaining to the Parade. All this shall be kept in a binder during the year, and at the first executive meeting attended it shall be turned over to the Executive members;

H)  Be directly involved in all aspects of fundraising to support the parade.